Seeing what you want to create 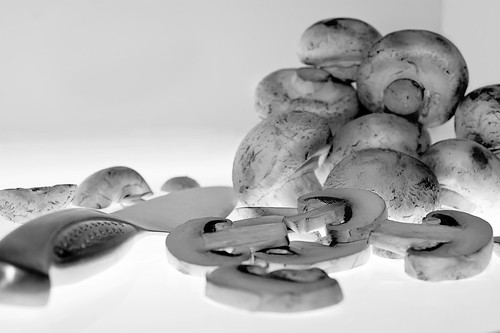 • Mushrooms •
Photographers learn many techniques to achieve a particular outcome or ‘look’ in their images. They go beyond reality to create a specific previsualised final image.
Click image to view large
• Mushrooms • By Netkonnexion on Flickr

Visualise the image you want to make.

Producing a picture can be as simple as point and shoot or as complex as a long planned production. To produce great images you often have to go beyond an elementary snap-capture. The best images are made from a careful thought process. The photographer has a goal in mind, a visualisation of what they want the final image to be.

In sports users of the technique are taught to visualise an explosive use of energy through which they then see themselves complete a record breaking event or win a race. In business the user visualises a goal for their business and continues to enrich the detail and nature of the successful outcome in their mind while working toward attaining it in the real world.

In cinematography whole scenes are previsualised and committed to storyboard form. This creates for the director a clear, detailed mock-up of the scene(s). The storyboards augment and crystalise their mental visualisation of the scene. The latter provides a shared vision for the production team with which to pursue the quality cinematic outcome.

In still photography there has been a long tradition of visualisation. Ansel Adams and several of his contemporaries used the technique. Adams himself defined the use of visualisation as…

…the ability to anticipate a finished image before making an exposure.
Ansel Adams, The Camera, 1980

“.
Adams continued to write about visualisation in photography throughout his life and clearly attributed much of his own success as a photographer to being able to see the finished print in mind before he took the picture.

Adams came to understand the nature of the visualisation through the creation of one of his most important pictures. While working in Yosemite making a picture of the “Half Dome

” he was using yellow filters to darken the sky. This was a common practice at the time used to simulate in black and white the depth of colour in a sky. However, Adams imagined that the yellow filter would provide an insufficient depth of sky tone to show the drama of the scene before him. Instead he imagined the final print would look better with a darker sky-tone. Applying a red filter instead, he created in the final print the dramatic outcome he had visualised before setting up the camera.

This proved an important moment. He became aware the camera did not simply record a scene. Instead it could be set up to achieve an outcome he had imagined before making the exposure. This visualisation became his guide to the production of the image rather than the absolute reality in the scene.

This realisation enabled Adams to see past the literal and technical capture of the plain camera and lens combination. Instead he was able to create something “expressive” that was a manifestation of the vivid image he had visualised in his imagination.

Today photographers learn many different techniques to achieve a particular outcome or ‘look’ in their images. We see deliberate under or over exposure scenarios created from daylight scenes, or dramatic blood-red sunsets over-saturated to emphasis the power of the retiring sun. The use of visualisation allows the photographer to see in their minds-eye what they want the final image to look like.

Visualisation does not ensure the success of an outcome but it does provide a powerful guide in the process of achieving success. As the photographers visualisations become more detailed and their artistic talents develop so does the visualisation.

Where visualisation is used the technique can only be successful if the appropriate technical steps are deployed. The successful rendering of the visualisation can only come out of a quality photographic process. However, there must also be an interdependence.

So, we can reliably infer that visualisation and skill set work together. Landscape photographers will tend to produce better sunset visualisations and images because that is their area of practice and expertise. At the same time fashion photographers will see an outcome for an image that shows off an article of clothing or a delicate facial bone structure because that is how they spend the majority of their time. Each has their specific photographic skill set and technical process. Each photographer also has their own artistic and observational skills that help build expressive visualisations for the type of images they want.

Visualisation is a dynamic and evolving skill. As you become familiar with new techniques your ability to achieve a particular visualisation develops. Visualisation is a skill that develops with awareness of the potential and an ability to imagine a great image before you produce it. The earlier you start to try deliberate visualisation and planning for its fulfilment the more likely you are to take control of your development as a photographer.

How to take each important step to make a photograph
The 5 secret steps every creative photographer should know
Wait for the shot – an easy guide
80 year old secret of world class photographers revealed
Don’t get lucky, get great photographs
Doing a Creative Shoot

Posted in Camera control, Composition, History, How to..., Light and Lighting, Opinion, Photography, Things to try, Tips Tutorials & Techniques, Whos Who of photography