Do you make this one awful mistake in your photos?

Posted on September 30, 2012 by Damon (Editor) | Comments Off on Do you make this one awful mistake in your photos? 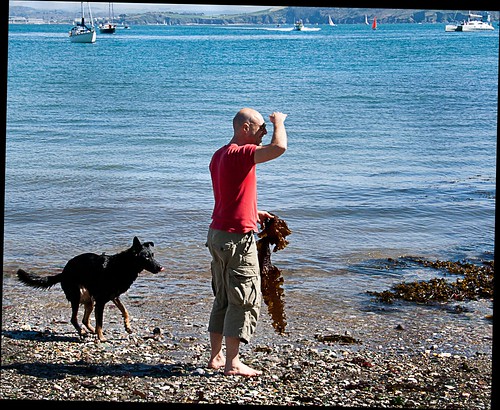 The horizon has only got to be off a little bit to look odd. It’s not just the horizon – other lines may cause problems too. In this image a quick shot meant the beach line across the bay was off the horizontal. After straightening, the black cut-outs show how much the picture was skewed. View large

The horizon is a main focus of viewing.

It’s a strong feature to orientate yourself in the image. When the main line in the shot is wrongly positioned it irritates your audience. This mistake is easily fixed in-camera or in processing later.

A major line like the horizon needs careful presentation. Strong lines catch the eye. You tend to match them to the edges of the image frame. They look peculiar when slightly out of line. That is not to say you should not take dynamic or action shots at interesting angles. It is the slightly skewed angle that is irritating. Interesting angles is about something special, not slight photographic inaccuracy. Make your special angle shots a statement.

Get the horizon straight in-camera

Being aware of strong lines is half the battle. When composing your shot, watch out for them. Line them up. There are two ways to do this…

Later, back at the computer

Sometimes a quick shot prevents perfectly lining things up. Straighten the picture in post-processing. Image editor applications have straightening tools. Normally they are really easy to use.

In Adobe Photoshop the straightening tool is used on importing the image. It looks like an angle bracket on the tool bar in the developer module (RAW format only). Drag it along the straight line you want straight. You can also swivel the picture when using the crop tool. Just go to a corner and move the cursor away from the corner at 45°. A quarter-curve cursor arrow appears. Hold down the right button and swivel.

In Irfanview the straightening tool is in: Edit Menu | Show Paint Dialogue. When the paint toolbar comes up hover over each tool. The tooltip will pop-up and tell you which is the straighten tool. Drag the cross-hairs along the line you wish to straighten. The image will swivel to fix the problem (see the image above with black infill showing the reorientation). Then you crop the image to get rid of the odd edges.

Damon is a writer-photog and editor of this site. He has run some major websites, a computing department and a digital image library. He started out as a trained teacher and now runs training for digital photographers.
See also: Editors ‘Bio’.
#1854#
This entry was posted in Camera control, Composition, How to..., Post Processing, Starters School, Things to try, Tips Tutorials & Techniques and tagged Composition, Cropping, Horizon, horizontal, How to Shoot, Post-Processing, Spirit level, Straightening Crop, Tripod, vertical. Bookmark the permalink.