Sepia is an old photographic effect.

It’s a photographic chemical process dating back to the 1800’s. Sepia creates a brown tone in the photograph. Today we sometimes colour our photographs in sepia tones too. What is the background to this old technique?

In the days of chemical processing black and white pictures were processed using metallic silver in chemical emulsions. In the sepia process the silver was replaced by an alternative, silver sulphide. Silver sulphide is a more stable toner than the metallic silver counterpart. Sepia toned photographs have a longer life than alternative compounds making them ideal for archiving and preservation. However, there are in fact a whole range of chemical toners and some of them have brown tones. In some cases the non-sepia toners are not safe to handle. Be careful if you are handling lots of old films and wear protective gloves.

Sepia, the colour, gets its name from the rich brown coloured ink derived from the cuttlefish Sepia. The ink had been used in art and writing for centuries before photography. The richness of the browns in the chemical development process was a close match to the sepia ink. In fact sepia has a considerable tonal range. While it can be used to create rich brown and white photographic prints it can be printed in such a way as to parallel greyscale in its effect.

Modern sepia chemical processing involves three stages. During those stages processes and chemical variations can be applied that allow the compounds to have different toning capabilities or mixed with alternative toners. As a result the modern chemical sepia process can create multi-toning effects, mid-tones and shadow forms. These allow multiple tonal forms in the final print.

Photographic toning is a way of changing a black and white picture to a different, warmer tone – a brown hue. Black and white are starkly contrasting. Sepia is a softer colour and easier on the eye. The sepia tone, while brown produces a ‘brown-scale’ picture, rather than a greyscale picture that would incorporate the black and white tones. As such, both are monochrome.

Of course today we use sepia in many ways. It can be used as it was in the past to create a softer, warmer colour in a print which is easier on the eyes than stark black and white. However, modern sepia no longer carries the archival or protective functions of the previous chemical process. Here are some other ways it is used today…

As a result of some quite flexible toning processes in using sepia the modern equivalent of sepia is a very loose term. In many ways digital sepia use is really just toning. Its the same as would be applied if we used a blue, green or red tone. Of course each image editing package has its own sepia toning colour. As a result you should experiment to make sure that your editor colour is appropriate to the way you use it.

In fact sepia is, like black and white, a fairly flat colour. Variations in the intensity of the toning can create quite variable light and dark shades. In the final print the flatness of the colour can be enhanced by using textured papers. On a screen image or digital projection textures can be incorporated into the image as I have included above. This relieves the monotony of the sepia when there is a large area of one tone in the image.

If your use of sepia is intended to give the appearance of age then other measures can help too. One idea is to give the impression of a distressed print. The photograph below is a scan from an old print. I have kept the dirt and creases on the image in order to give that “distressed” effect that makes the image look like it has been around for a long time. 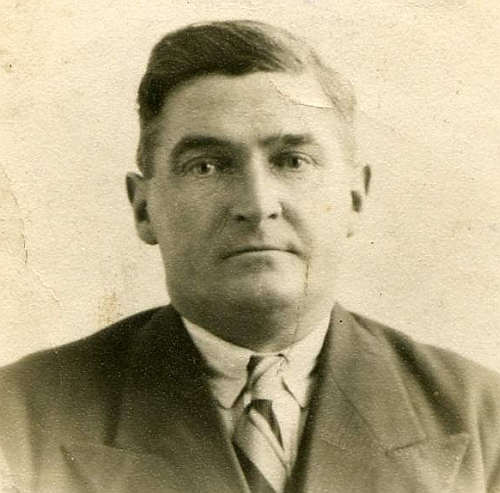 The photographs of the past are often distressed by damage and age. Modern images can be given the same appearance with a little work in an image editor.

The distressed appearance can be reproduced carefully in post processing to give the impression of age and deterioration. You will have to practice such skills to make them realistic, but worth it if the final outcome is effective.

Finally, one of the things that people often forget is consistency. If you are going to do a photograph in sepia in order to make it look old, then remember to make the clothes, objects and environment within the picture match the age of the intended shot. There is nothing more confusing to a viewer than mixed messages. An appearance of old processing, but modern clothes, just looks odd. So try to make your image and processing match.