Do you have an intention for your photographs? 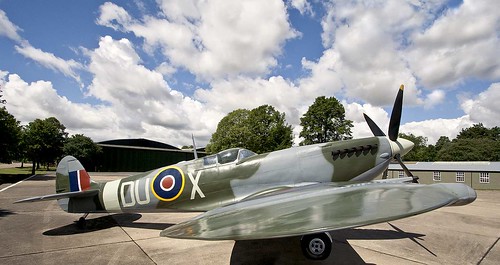 Consider the reason for taking a photograph…

I had cause to consider the nature of several photographs this evening. A judge was discussing the photographs in a competition. On several occasions he referred to photographs he was judging as “record shots”. This is not a negative term.

It surprised me when a judge in a competition called the photograph above a record shot. I enjoyed taking this photograph. I had seen the aircraft on a previous visit to The Imperial War Museum at Duxford

. It is a replica of one of the wonderful fighter aircraft of World War II – a Spitfire. I had considered it for some time and had lined up this shot in my head for some weeks before my arrival. I was fortunate to be blessed with a great sky. The angle of the shot was in line with the movement of clouds in the sky. I put on a wide angle lens and took about 10 shots along the lines I had planned. I wanted to make the wing disproportionate to the fuselage to give it foreground weight and invest depth in the picture. With a wide-angled lens this would make the wing seem really wide and long.

I may not be an artist in the traditional sense. I know I tend to take a rather geometric view in my pictures. It’s my signature, my style and my pleasure. However, it is also my interpretation. In this shot I really took my interpretation to some length. The body is distorted, the wing out of proportion. The sky deliberately elongated by the perspective of the wide angle lens. But to me this view showed the plane off in a unique way and presented a powerful perspective. I think this picture is heavy on interpretation and personal vision. Call it what you will, one thing it was not, is a record shot.

So, this evening when I was considering a judges words on what he called a record shot I was suddenly reminded of my picture above. It struck me that very often the viewer reads into the photograph more than the author has to say on a particular subject. In the case of my picture above the viewer saw a straight forward representation of a great aircraft. I on the other hand saw an opportunity to display, in a unique way, the wonderful geometry that made this aircraft great – its superb flying design.

The two views, my geometric tribute and the judges record of a great aircraft, may not seem too far apart to you, the reader. Yet, to me it signalled that I had failed in my duty as a photographer to represent my vision. I had not convinced the judge that I had invested my personal view, my artistic impression, in this photograph.

As photographers we are communicating a point of view with every shot. It may be appropriate to devote time and effort to faithful reproduction, equivalent proportion and careful exactitude to create a record shot. That is a worthwhile endeavour.

It is equally important that at other times we express our interpretation of our subject in a manner that brings out our unique view, comment or observation about a subject. There are two issues to keep in mind. First, we should always have a clear vision about what we are trying to achieve with a shot. Second, we should be finding the strongest and clearest way to express that intention, lest our viewers miss the point of the shot.

Art is fickle but viewers are more fickle…

Yes, throughout the ages art has been misinterpreted. And, we must sometimes acknowledge that the viewer may not understand our point of view. You will never convey your meaning to 100% of the viewers. However, I believe that viewers have a right to expect that you make every possible effort to communicate your intention for the photograph and make your point as clearly as possible.

The difference between a record shot and an artistic impression may be a thin line. But if your photograph is to succeed there should be no such lack of clarity when conveying your communication or meaning.