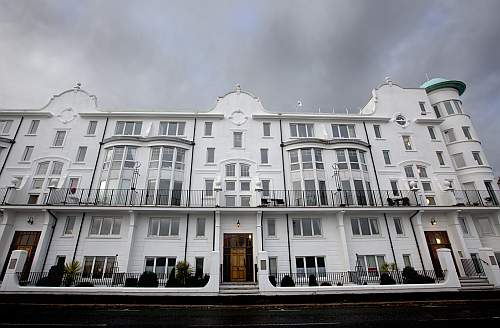 Seafront homes. I really exaggerated the keystone effect to try and emphasis the grandness. What I did not realise until later was that there was some ugly litter on the pavement (removed in Photoshop)

Taking care to see the scene

Take a close look at your picture after taking it. You might want to take another. You have the screen to thank for the ability to check out the details of the shot. The biggest step forward in digital photography was the screen. Now, you can look at your shot immediately after the event. You have a chance to try again to get it right in camera. Editing your picture back at base is fun – if you have a specific reason to enhance your shot. Editing every picture because you did not check it for ugliness, errors or good composition is simply a waste of time.

I took the picture above in a hurry. It was intended as a fun shot to highlight the grand frontage of these great seafront buildings. I was quite pleased with it on glancing at the screen. Then back at base I saw a different scene… I had not seen nasty pieces of litter lying around on the pavement. In a rush I had missed something that changed the scene. So then I was committed to a session with Photoshop to produce what you see now.

Capture it right in-camera. It is faster than fixing it up later. In my case two minutes picking up the odd litter pieces would have saved me 15 minutes on the computer.

What should you do to ensure the problem above does not arise? ‘Chimping’! Originally people laughed at the early digital photographers. ‘Ohs’ and ‘ahs’ were issued as they admired their handiwork on the back of the camera. Just like a bunch of chimps! Yes, as simple as that. The verbal exclamation of delight at your own creation amuses others but performs a great function.

Have fun with your camera!

Damon is a writer-photog and editor of this site. He has run some major websites, a computing department and a digital image library. He started out as a trained teacher and now runs training for digital photographers.
See also: Editors ‘Bio’.
#1854#
This entry was posted in Starters School, Tips Tutorials & Techniques and tagged Approach, Distraction, How to Shoot. Bookmark the permalink.