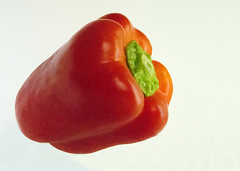 High ISO, along with other types of digital interference, creates ‘noise’. This is where individual sensor-points (sensor-pixels) on the digital image sensor create a piece of data that is erroneous. The erroneous data creates a grainy texture in the final picture. The slightly speckled result lowers the quality of the picture.

Modern cameras have reduced the noise created in the sensor in two ways. The sensor itself has been improved so it does not create noise to start with. Additionally, most cameras run a software program to reduce the noise. Both sensors and software treatment of noise has improved considerably over the last ten years and continue to improve. Furthermore, some image-editing or processing software also offer software noise-reduction filters or functions. It is unlikely that noise will be eradicated completely in the near future, but it may be lowered to such levels that it may not be visible without careful inspection.

The nearer you set ISO to the lower end of its range (eg. ISO 100 or lower) the lower the noise. However, modern cameras are pretty good at preventing noise. Top quality DSLRs can go above 1000 ISO before seeing much noise. Even then it’s difficult to see in some cases.

Some people consider noise adds a type of texture or grain. In the days of chemical film photography the ‘grain’ was sometimes considered to to impart a charming or quaint character to the image. In digital imaging the noise is slightly more well defined than in film photography. The image is often just punctuated by tiny white or coloured dots. In film grain or noise, the grain was slightly less well defined and softer, blending a little into the surrounding context.

In general, it’s better to avoid digital noise unless you create it deliberately (for example by using a software filter in an image editor or by deliberate use of high ISO). Often the viewer considers it to be simply a distraction. Deliberately created grain is, on the other hand, intended to emulate the softer character of film grain.